Three years after they staged one of the most successful comebacks of the decade, enduring British pop legends Steps – aka H, Claire, Faye, Lee and Lisa – return once again with their sixth album, What the Future Holds, out 27th November, via BMG, and a huge arena tour across the UK and Ireland in November / December 2021. Announced earlier in the Autumn, tickets to the What The Future Holds 2021 Tour have been selling fast, leading them to today announce four extra shows including a second date at London’s The O2.

The sure-to-be epic What The Future Holds 2021 Tour will see the five-piece headlining 18 arena shows across the UK, kicking off in Sheffield on November 2nd 2021. The four additional dates are Birmingham Resorts World Arena on November 6th, Manchester AO Arena on November 12th, Glasgow The SSE Hydro on November 23rd and London’s The O2 Arena on November 27th. Tickets can be purchased from Friday 10am, with a Steps fan presale starting tomorrow. Fans who pre-order any format of the album will be eligible to join the pre-sale on Wednesday 25th November at 10am. Steps will be joined on the tour by the brilliant Sophie Ellis-Bextor as a special guest. Tickets for all dates are on sale from aegpresents.co.uk/steps. The full list of tour dates are below.

As well as the extra tickets going on sale, Friday is also cause for celebration with the release of What The Future Holds, their hotly anticipated sixth album. The What The Future Holds album will be available on all digital platforms plus CD, Vinyl (including a limited edition transparent pink edition) and Cassette (including a special collector’s box with five separate transparent pink solo cassettes with an intro from each band member). The album can be preordered now from the Steps Superstore here.

If you thought 2017’s hi-energy Tears on the Dancefloor album, which was led by the giant glitter ball-sized banger Scared of the Dark and concluded with an arena tour that shifted over 200,000 tickets, was a step into the big leagues then brace yourselves because this new album’s first single, the album’s thundering, gloriously dramatic title track, was written by pop queen Sia. Built around a typically Steps-esque bittersweet refrain of “one foot in the past and one foot in the future”, it felt like the perfect statement for a band who have taken a wave of nostalgia and alchemised it into an album full of future anthems. What The Future Holds quickly hit the top spot on iTunes and is approaching 1 million streams on Spotify. The video can be viewed here. Alongside Sia, the versatile album also sees them reunite with the likes of Fiona Bevan (Ed Sheeran), Ina Wroldsen (Shakira) and Karl Twigg, who worked on their first three albums, plus experiment with the likes of Hannah Robinson (Kylie). “We will never forget the past with Steps, it’s what made us,” says Steps, “but we’ve got to look to the future too.”

If What The Future Holds represented the future for Steps, then the current single, Something In Your Eyes, gleefully celebrates the past via a classic, ABBA-esque chorus, a joyous key change and a brilliantly unexpected staggered outro. “It’s so much fun, it’s a real nod to old Steps, but it works so well alongside What The Future Holds. You can’t help but sing along to it and feel uplifted by it.” add Steps. Something In Your Eyes premiered on Zoe Ball’s Radio 2 Breakfast Show and has since been added to the Radio 2 playlist. The official music video, which was directed by Carly Cussen, is out now (view here).

Launching during the halcyon days of pop in 1997 with their line-dancing classic 5,6,7,8, Brit award winners Steps set about re-turfing the music landscape via 14 UK top 10 singles and three multi-platinum albums in three years including #1’s Tragedy and Stomp. Fast forward twenty years, the band returned with the mighty Tears On The Dancefloor, which hit #1 on the physical and iTunes album charts and went Gold within a matter of weeks, becoming the second biggest-selling independent album of 2017 behind Stormzy. Their subsequent ‘Party On The Dancefloor’ tour saw the band sell out twenty-two arenas. 23 years on from their debut, 2020 sees them return with What The Future Holds. 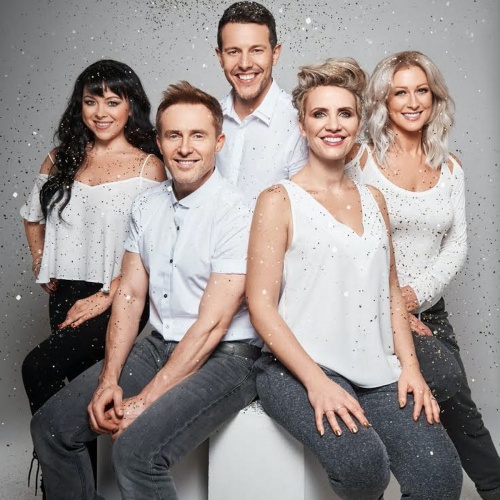