Robbie Williams has been a rock to The Struts frontman Luke Spiller throughout his battle to get clean.

The 32-year-old rocker has overcome addiction and is grateful to the ‘Angels’ hitmaker for the “sound advice” he passed down to him when Robbie recorded his vocals for the band’s latest album’s title track (‘Strange Days’).

The pair have remained friends and Robbie – whose addiction to cocaine, ecstasy and alcohol spiralled out of control after leaving boy band Take That in 1995 – was there for Luke when he was struggling with withdrawals.

He told the Daily Star newspaper’s Wired column: “As we were meeting I was going through a lot of stress.
“I had kind of become quite dependent on self-medicating.

“He is such a lovely guy and it’s no secret that he’s been through all of that.

“He definitely gave me some sound advice and even now I call him up, and he still checks up on me like, ‘How are you feeling?’

“I was going through withdrawals about a month ago and I called him up and I was like, ‘Ah this is horrible’ and he was like, ‘Don’t worry this will get better.’

“He is really, really genuine, really lovely and always filled with great advice.”

Luke feels “very lucky” to have struck up a close bond with the 46-year-old pop superstar.

He added: “As soon as we first spoke I was actually quite taken back by how open he was, how generous he was with his advice and his point of view.

“We were talking like we had always known each other.

“It was a beautifully strange experience and has been like that ever since.
“I feel very lucky to have a friend in him.
“Even in the whole recording process, he was so gracious.”

Despite battling to get sober while making the band’s third album, Luke believes the record – which also features Def Leppard’s Joe Elliott and Phil Collen, Rage Against The Machine’s Tom Morello and Albert Hammond Jr. – is their best yet.

He said: “Dare I say it, it could be our greatest work to date.

“I hope we’ve captured a moment in time that will inspire people for years to come.” 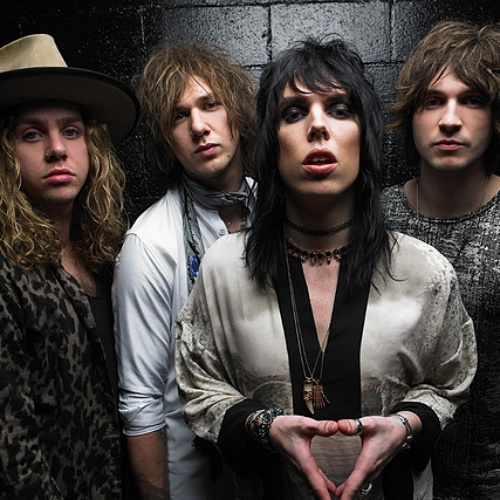