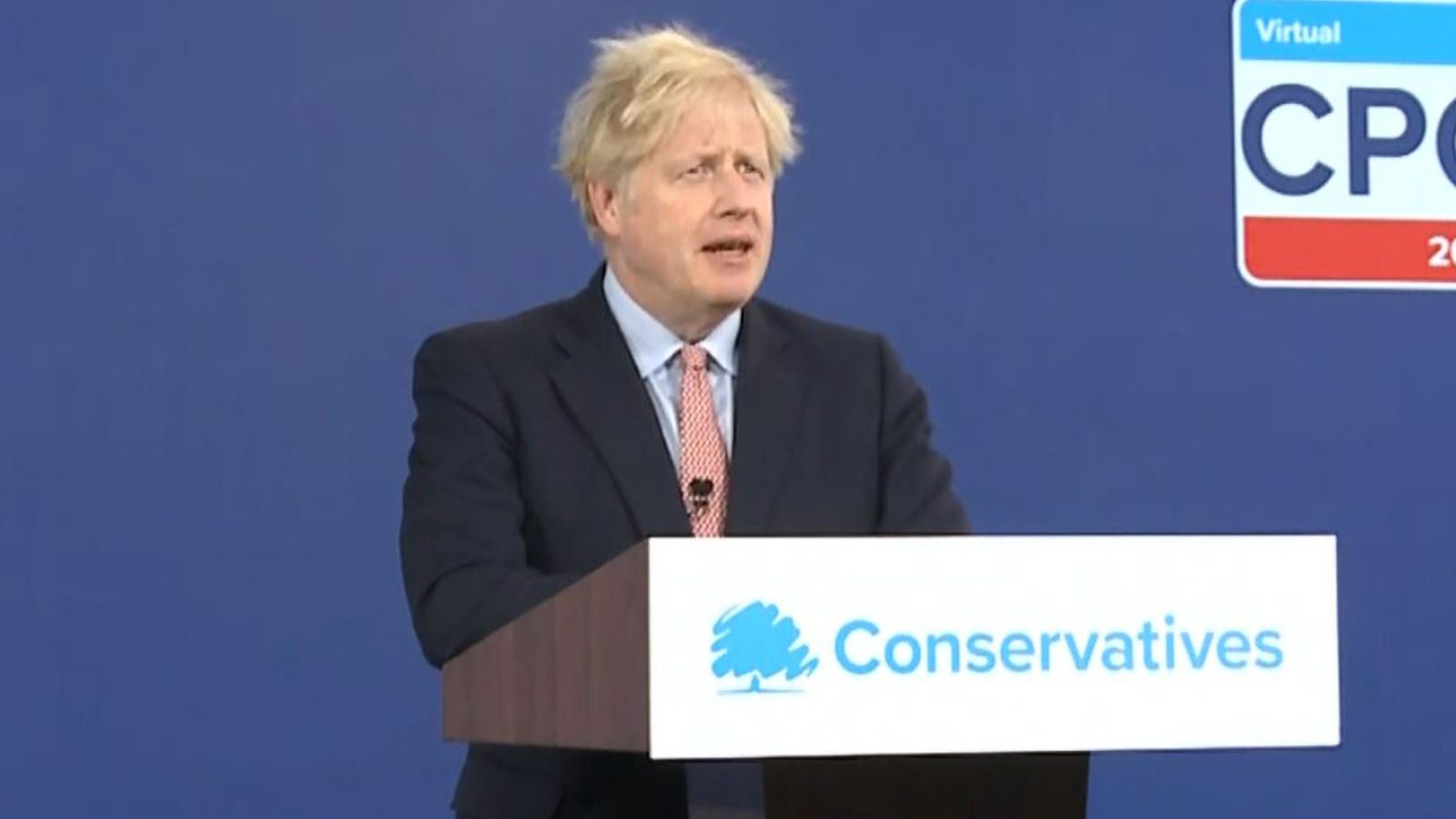 Boris Johnson has dismissed claims coronavirus has “robbed me of my mojo” as he set out promises on social care, green energy and housing in his Conservative Party conference speech.

The prime minister, speaking via a video stream to his party’s members, launched a strident defence of the private sector as he vowed to “build back better” from the COVID-19 crisis.

Declaring he had “had more than enough of this disease”, Mr Johnson promised Tory members that the next time they meet it would be “face to face and cheek by jowl”.

In the most eye-catching of the prime minister’s policy proposals in his address, Mr Johnson reiterated his election manifesto promise to encourage a new market in long-term fixed rate mortgages.

The prime minister said: “We will transform the sclerotic planning system, we will make it faster and easier to build beautiful new homes without destroying the green belt or desecrating our countryside.

“But these reforms will take time and they are not enough on their own.

“We need now to take forward one of the key proposals of our manifesto of 2019: giving young, first-time buyers the chance to take out a long-term, fixed-rate mortgage of up to 95% of the value of the home – vastly reducing the size of the deposit.”

He added: “We believe that this policy could create two million more owner-occupiers – the biggest expansion of home ownership since the 1980s.

Mr Johnson also promised to “fix the injustice of care home funding” by “bringing the magic of averages to the rescue of millions”.

“COVID has shone a spotlight on the difficulties of that sector in all parts of the UK – and to build back better we must respond, care for the carers as they care for us,” he added.

The prime minister confirmed his promise that offshore wind power would be powering every home in the country within 10 years.

“Your kettle, your washing machine, your cooker, your heating, your plug-in electric vehicle – the whole lot of them will get their juice cleanly and without guilt from the breezes that blow around these islands,” he said.

“As Saudi Arabia is to oil, the UK is to wind – a place of almost limitless resource, but in the case of wind without, the carbon emissions and without the damage to the environment.”

Analysis – PM fails to halt questions about his approach

Boris Johnson did three things in his speech, none of which were especially memorable.

On coronavirus he said that life would be back to normal by next conference season – something any organiser of big events would quickly cast extreme doubt on.

Even his Cabinet ministers doubt we will be gathering like Tory conferences of old in a year, given the likely destruction of the events industry.

Mr Johnson set out a shopping list of promises, almost resembling Gordon Brown at times, with yet more invocations of “world beating” futures, which will be judged on delivery not announcement.

And he framed Labour as opposing free enterprise – filling the vacuum that Sir Keir Starmer himself is creating over his economic approach – as well as saying the Labour leader himself was “Captain Hindsight”.

Most notably, he made clear his dislike of critics, suggesting those who had questioned his fitness after his bout of severe coronavirus were “seditious” – treasonous – and coming from Remainers who want to stop Brexit.

However strong this language, it won’t make questions about his approach go away.

Worse than the first wave: PM under pressure to toughen rules after highest death toll since May

‘Rapid achievement’ allows vaccine trial to move to next phase